Ever wonder how a certain video came about? Earlier I posted an animated chalkboard video that won 3rd place in a contest put on by a doodle software video developer. Here I’ll show you how that doodle video came together.

First, the contest itself could be on any topic, but the video had to be at least two minutes in length and up to five. So, I needed an interesting topic that could be told using the doodle video format. I chose heart health.

Once I had the topic in mind, I needed to develop it further. I whipped out my trusty yellow notepad and got to work.
I decided to cover risk factors, heart attack signs, and tips for improving heart health. 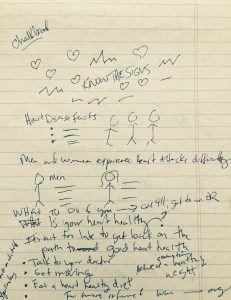 From there, I launched Scrivener, my favorite word processor, and wrote the script for the video. One of the nice things about Scrivener is it has a feature that will estimate the reading time for you. In this case, the script came to 565 words and had an estimated reading time of two minutes and sixteen seconds — perfect for my needs. In reality, the voiceover ended up being about 3 and half minutes long. That’s because reading out loud for a voiceover requires a slower pace and pauses for effect than merely reading to yourself.

Now that the script was done, I recorded the voiceover. Yes, that’s my voice you’ll hear on the video. I’m not a professional voiceover artist but have done a few here and there. I waited until the kids were in bed and used a Blue Yeti microphone. I have always found it easier to add video to an existing voiceover rather than the other way around.

This is pretty much standard practice in the video industry.

Next, it was time to create the animated doodle video. Since the contest was sponsored by the software developer, Doodly, I was restricted to using that tool only. I enjoy the software and use it a lot, but oftentimes use it in conjunction with Final Cut Pro X. The software comes with a lot of “assets” included, but also allows you to upload your own. Using my own graphics gives me more creative control over the look of the video. I opted for a chalkboard background though I could have just as easily chosen a whiteboard or glassboard background. 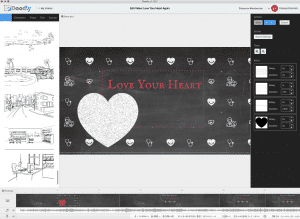 With the narration in place, all I had to do was find graphics and put them in place. Okay, there’s more to it than that. I also had to fine-tune those graphics so that they could be traced by the hand, adjust the timing so they appeared at the appropriate time (see why having the audio in advance is so helpful?), add text, and find and add background music.

I used Flaticon’s pattern generator to create the background pattern for the title and closing screens. This is a neat site for icons, icons, and more icons. It’s free if you don’t mind adding an attribution for the icons you use. I have a premium account which allows you to bypass the attribution requirement. I also used several icons from the Flaticon site within the video as graphical elements. For example, the 25% pie chart, heartbeat blip, lady doing yoga, and hands with a heart are all icons.

It’s a simple effect, but fairly complicated to build in the software.

Finally, I exported the video and submitted it to the contest. There were a lot of creative entries so I’m proud to have my video considered one of the top three. I won a small monetary prize as well.

Now that you know the behind-the-scenes story, take a look at the finished video below.

Learn to Love Your Heart Again

Your heart beats 24/7, your entire lifetime, quietly doing its job. It’s a big job, too, with an average of 115,000 beats per day. Unfortunately, heart disease is the leading cause of death for both men and women. In fact, one out of every four deaths in the United States is caused by heart disease.

49 percent of Americans — nearly half of us — have at least one of the top three risk factors!

According to the National Heart Attack Alert Program, the major signs of a heart attack include:

If you think that you or someone you know is having a heart attack, call 911 immediately.

Talk to your doctor about your heart, and with his or her okay, get moving! Even modest amounts of exercise can make a difference, so if you need to start out slow, you can still benefit. Adding a ten-minute walk each day is a great way to get started. The American Heart Association says that walking just 30 minutes per day can lower your risk for heart attack and stroke.

Take measures to reduce stress and anxiety from your life. Exercise can help with this, which is a nice bonus. Yoga, meditation, prayer, spending quality time with loved ones, reading, disconnecting from social media, and immersing yourself in an enjoyable hobby are all helpful activities that can alleviate stress.

If you smoke, now’s the time to get serious about quitting. You’ll also want to get your blood pressure, cholesterol levels, and other health conditions such as diabetes under control.

Eat a heart healthy diet with vegetables, fruits, lean protein, seafood, and healthy fats. You may want to consider cutting down on caffeine and alcohol and replacing unhealthy snacks with healthier choices such as a handful of nuts.

Achieve and maintain a healthy weight. For some, this means dropping a few pounds; for others, it might mean gaining weight. Again, consult your doctor to determine the most appropriate goals for your specific gender, age range, and body type.

Finally, be grateful for each heart beat. That’s about 115,000 tiny blessings you receive each and every day. The more you learn to love your heart, the easier it becomes to take care of it so it will continue to take care of you.

Want me to create a custom doodle video for you? It all begins by clicking the button below.

Some of the links on this page are “affiliate links.” This means if you click on the link and purchase the item, I will receive an affiliate commission. You won't pay a penny more, and this will help me to keep the site up and running.

Regardless, I only recommend products or services I use personally and believe will add value to my readers. I am disclosing this in accordance with the Federal Trade Commission’s 16 CFR, Part 255: “Guides Concerning the Use of Endorsements and Testimonials in Advertising.”